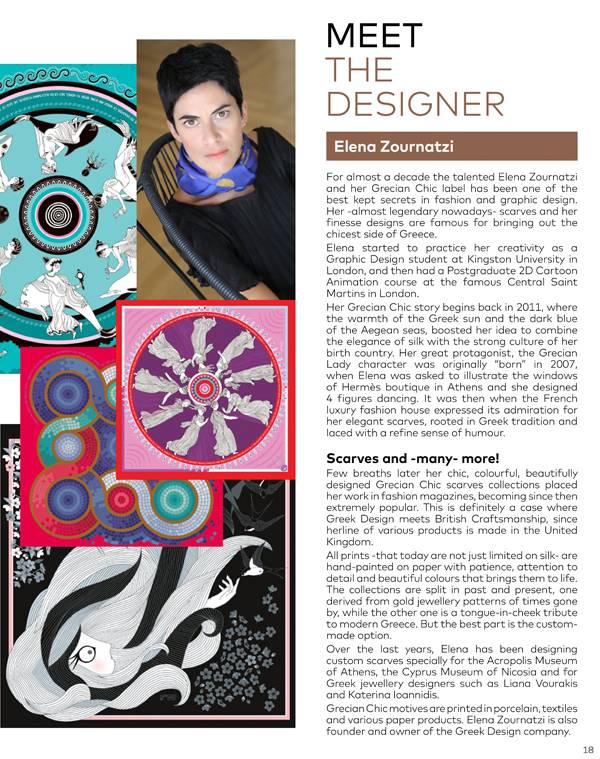 For almost a decade the talented Elena Zournatzi and her Grecian Chic label has been one of the best kept secrets in fashion and graphic design. Her -almost legendary nowadays- scarves and her finesse designs are famous for bringing out the chicest side of Greece.Elena started to practice her creativity as a Graphic Design student at Kingston University in London, and then had a Postgraduate 2D Cartoon Animation course at the famous Central Saint Martins in London. Her Grecian Chic story begins back in 2011, where the warmth of the Greek sun and the dark blue of the Aegean seas, boosted her idea to combine the elegance of silk with the strong culture of her birth country. Her great protagonist, the Grecian Lady character was originally “born” in 2007, when Elena was asked to illustrate the windows of Hermès boutique in Athens and she designed 4 figures dancing. It was then when the French luxury fashion house expressed its admiration for her elegant scarves, rooted in Greek tradition and laced with a refine sense of humour.

Scarves and -many- more! Few breaths later her chic, colourful, beautifully designed Grecian Chic scarves collections placed her work in fashion magazines, becoming since then extremely popular. This is definitely a case where Greek Design meets British Craftsmanship, since her line of various products is made in the United Kingdom.All prints -that today are not just limited on silk- are hand-painted on paper with patience, attention to detail and beautiful colours that brings them to life. The collections are split in past and present, one derived from gold jewellery patterns of times gone by, while the other one is a tongue-in-cheek tribute to modern Greece. But the best part is the custom-made option. Over the last years, Elena has been designing custom scarves specially for the Acropolis Museum of Athens, the Cyprus Museum of Nicosia and for Greek jewellery designers such as Liana Vourakis and Katerina Ioannidis. Grecian Chic motives are printed in porcelain, textiles and various paper products. Elena Zournatzi is also founder and owner of the Greek Design company.

go back to press

We use cookies to ensure that we give you the best experience on our website. If you continue to use this site we will assume that you are happy with it.Ok